A transformative Vision for Birsfelden
In collaboration with Hannes Gutberlet

Natural elements such as the Birs, the Rhine and the Hardwald, the industrial harbor towards the east as well as the infrastructural corridors along the rail- tracks and regional highways have created an urban pocket that seems to cut-off Birsfelden from its immediate bordering communities. As the built territory appears to have already reached its limits, Birsfelden shows no symptoms of a noticeable sprawl so typical for other communities within the Canton Basel Land. Meanwhile, the overall population is decreasing and new building projects are rare in Birsfelden while its main shopping street suffers from a mix between residential under-demand and provincial disorientation.

Our proposal intends to approach the transformation of the Sternenfeld in relation to three interdependent propositions. Firstly, by recycling an existing neighborhood we lay our focus on currently idle spaces and hidden potentials instead of engaging in projections for fundamentally new urban structures on unbuilt territories. Secondly, by understanding the existing buildings as valuable stock of embodied energy capital we hope to offer opportunities of overall energy savings and an intervention strategy that is far better embedded within the current conditions of the municipality. Finally, by transforming the urban typology entirely through spatial additions and a rearrangement of its layout, new possibilities of transformation and adaptation are enabled which promise to reveal more flexible scenarios for future growth.

We propose to place additional low-rise volumes adjacent to existing buildings by filling currently open spaces according to our proposed checkerboard grid pattern. The typological merger between highrise slabs and low-rise clusters could thus enable enhanced interaction on new and existing streets at ground level. Further, it also offers relatively secluded and yet defined spaces on each building block in the form of semi-public and private courtyards. In reference to original concepts of modernist building types, the ground and first levels of the existing high-rise slabs are cleared as much as possible from their non-load bearing structures. This alteration creates a covered entrance gallery to each communal block courtyard with and enhanced spatial experience. The addition of low-rise courtyard buildings at various scales further provides additional residential spaces for various types of households and income groups. Each building block is conceived as a mix between existing high-rise slabs, public or commercial buildings and a composition of one to two story courtyard houses. Ultimately, the combination of densely built blocks with a layered sequence of urban rooms and courtyard spaces forms a more human-scaled relationship with existing and additional streets. 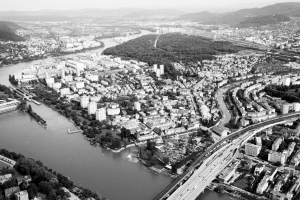 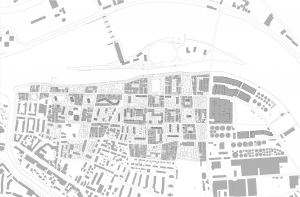 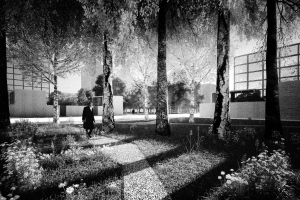 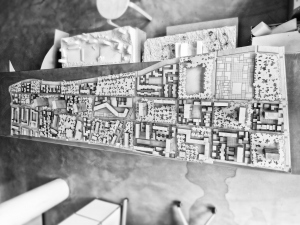 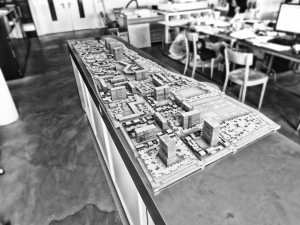